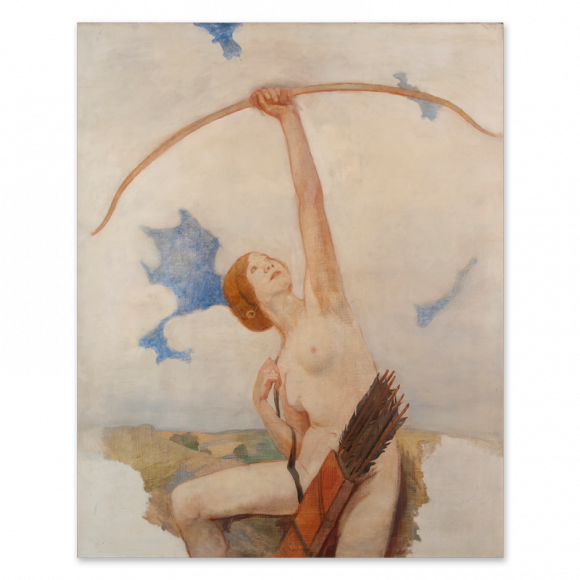 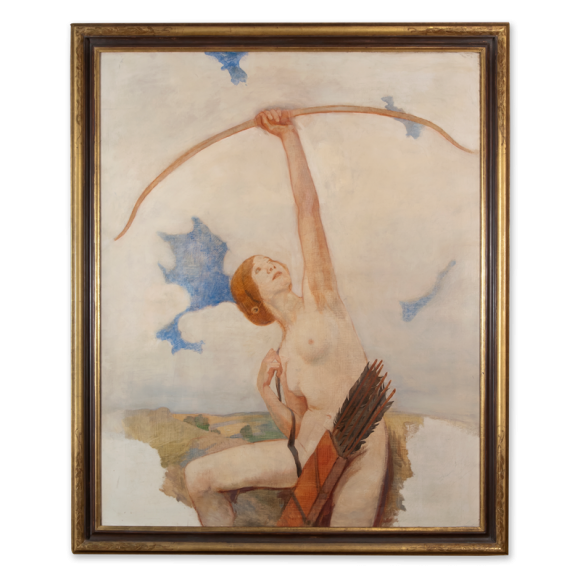 Born in Edinburgh, Burns studied at the Glasgow School of Art and his first work from the 1880's shows him to have been one of the earliest enthusiasts in Scotland for the Art Nouveau. Then, like his fellow painter John Duncan, he developed around 1900 a distinct Symbolist streak in his art, which he showed not only in Glasgow and Edinburgh, but perhaps unsurprisingly at the Vienna Secession as well. In tandem with this, his passion for Celtic myth and legend started to influence his work and he was to embark on a lengthy project illustrating a collection of Scottish ballads. This project, only completed in the late 1920's, still stands as one of the best examples of Scottish book illustration. A stroke cut short his career, but his work places him firmly as one of the more interesting and varied Scottish stylists of the early 20th century.

This present picture must have been produced by Burns around 1900. There is still the distinct softness in the sweeping outlines of the body and the cloud formation that hint at Burns's art nouveau period. The overall conception of the picture is interesting too. Clearly a sketch, it is conceived on a very large scale and in all probability is a design for a mural. This idea is further supported by the unusual cross hatching across the more deeply coloured passages, which lend a chalky tonality to the picture redolent of painting on plaster. This work remained in the artist's studio at his death, and at its dispersal in the early 1980’s it was still unclear whether it had ever been realized somewhere in finished form. In its present form though it is quite substantial enough to be a very appealing work of art in its own right, but excitingly still retains all the freshness and immediacy of the first translation of an artist’s thoughts into brushstrokes.

The model is most likely to be Cecile Walton (1891-1956), who modelled for a number of painters in her days as an Edinburgh art student and is known to have modelled for Burns, one of her teachers. She was the daughter of the famous ‘Glasgow Boy’ Edward Arthur Walton (1860-1922) and became a fine painter in her own right. She exhibited both in Edinburgh (Royal Scottish Academy) and in Glasgow from 1907 and it must be around this time that this present work was executed.