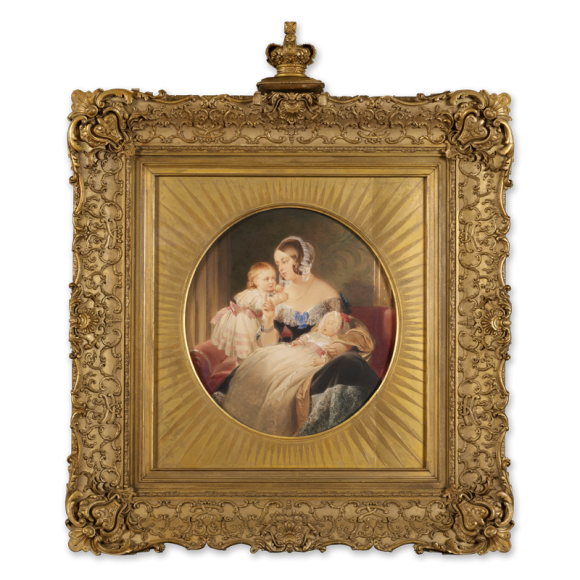 A copy of the oil in the Royal Collection

This fine quality watercolour of a young Queen Victoria and her two eldest children is a faithful reproduction of Sir Edwin Landseer's oil painting now in the Royal Collection. The two children depicted with the young Queen are Princess Victoria, the Princess Royal (b 1840) and Prince Albert Edward, later King Edward VII (b 1841).

The original oil was painted by Landseer in 1841, and by 1844 a black and white engraving by Samuel Cousins had been commissioned, which was widely circulated. What is interesting about this present work is that the colours are completely faithful to the colours of the oil. So, rather than following the engraving, the copyist must have been one of the few privileged artists allowed into the Royal Collection to copy directly from the original. Alfred Edward Chalon, recently appointed Painter in Watercolour to her Majesty Queen Victoria, was clearly much in favour at the time, and would seem to be by far the strongest candidate to be our copyist. Further, his own excellent portrait (in oil this time) of Queen Victoria in her State Robes had recently been engraved by Samuel Cousins. So Chalon and Cousins clearly knew each other already, which further re-enforces the likelihood that Chalon is our artist.

It is notable that Chalon’s watercolour is significantly smaller than Landseer’s oil but close in size to Cousins’s engraving. Therefore, perhaps the most likely scenario is that Chalon was expressly instructed by the royal household to make this copy in watercolour from which Samuel Cousins could work up his engraving.

The work is housed in a quite superb plaster frame from the period.