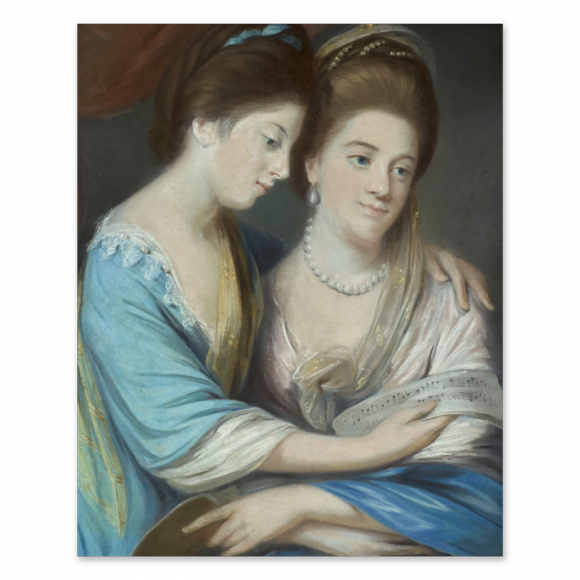 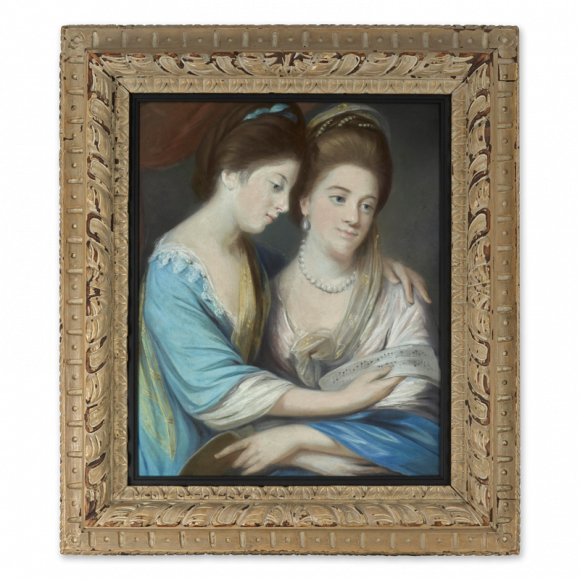 Private Collection, London since the 1960s

Possibly London, Society of Artists, 1769, No. 147 ‘Portrait in Crayons of Two Young Ladies’

Born in Dundee in 1723, Katherine Read came from a family with strong Jacobite leanings. Indeed her uncle, Sir James Wedderburn, had been executed for the part he played in the 1745 rebellion. Initially she must be classified as largely self-taught, beginning to earn something of a living and a reputation by painting and drawing the ladies and their children of her local acquaintance. But by the late 1740s she is recorded as visiting Paris, the home in exile for many who had espoused the Jacobite cause. There she acquired further skills by visiting the great French pastellist Maurice Quentin de la Tour (1704-1788). Whether she could be described as his pupil is debatable, but she did refer to him as “my old Master”. However, with the expulsion from Paris of the Stuart ‘Pretenders’ James and Charles, Read followed them to Italy, where she arrived in late 1750. There again introduced into aristocratic circles, she developed a group of admirers who became her sitters.

In 1753 she left Italy, returning to London via Venice where she made a point of visiting the famed Italian pastellist Rosalba Carriera (1673-1757). From Read’s letters it is clear that she rated Carriera highly and Latour higher still – but it’s worth noting from her correspondence also that she felt she would one day be capable of equalling either. Back in England she set up the first of her London studios in St James’s Place, determining to make a professional practice. By 1754 she had been given the title of ‘Paintress to the Queen’ after completing a pastel of Queen Charlotte. On a further visit to Paris in 1764, where she had received several commissions from the French aristocracy, she was reported in England to have been made ‘Painter in Crayons to her Majesty’ (the French Queen Consort Marie Leszczynska). The following year in England the press reported that the Princesses Louise and Caroline were sitting to “the celebrated Miss Read” for their portraits.

During this period there is no question that Katherine Read was an artist of considerable repute. She exhibited at the Society of Artists from 1760 to 1772 and at the Free Society from 1761 until 1769. Both societies made her an ‘honourable member’ in 1769, largely it seems in response to the fact that the Royal Academy, founded in 1768, had inducted two women, Angelica Kaufman and Mary Moser as founders of their own society. Perhaps observing the way the winds of popularity were blowing, later Read herself moved to the Academy, exhibiting there in the 1770s. By the late 1770s however, demand for her work seems to have slowed in England and in 1777 she sailed for India to try her hand there. She appears to have remained only a year there, and on her return journey in 1778 she died and was buried at sea.

At her best Katherine Read could paint and draw extra-ordinarily well. She had not perhaps the characterization of Latour, but plenty of her productions did in the end rival those of Carriera. In England, following the death of Francis Cotes (1726-1770), the pastel field was effectively hers. More remarkable though is the fact that as a woman - of some birth and education but unmarried and financially unsupported - she managed to live by her art in the middle of the eighteenth century. Contemporary critiques of her work range widely, but it is telling that she was so often the subject of comment. Amusing to note also is that she seems to have presented herself without any airs and graces. By all accounts her personality was on the dour side and her appearance quite unkempt. Not an asset for the portrait painter one would have thought, who must of necessity flatter. But it does give the art-historian the sense that she was totally devoted to her art.

In the current climate, where concern to give female artists their due is growing, Katherine Read is naturally being re-assessed. It is becoming apparent that in the two and a half centuries following her death, many of her portraits have been given to other artists; the pastels to Carriera and Cotes; the oils to Reynolds and Ramsay in particular. This is changing now. In Dundee in 2021, the McManus Gallery’s acquisition of Read’s remarkably proficient oil painting of Lady Glenorchy is testament to this overdue shift towards her proper recognition. It is thoroughly appropriate that a Scottish public gallery should be interested to acquire a major work by this highly single-minded Scottish female artist.

This present picture is a good, big and thoroughly representative example of Read’s work in pastel. Rather more ambitious in composition than her usual single figures, this double portrait shows considerable skill in the intertwining of her two sitters. Her colours here, light blues, greys and whites – typical of her and typical of the classicizing tendencies of late 18th century artists - combine harmoniously and the addition of sheet music, underlining the girls’ artistic interests, is an attractive touch. It is nearly impossible to identify her works with those she exhibited publicly, as for the most part these appear anonymously as ‘Portrait of a Lady’ etc. But given the relative rarity of a double portrait in her oeuvre, we may be looking here at her 1769 exhibit at the Society of Artists. Her work, number 147 in that exhibition, was entitled ‘Portrait in crayons of two young ladies’. The subject fits, the medium fits and the date is totally plausible.