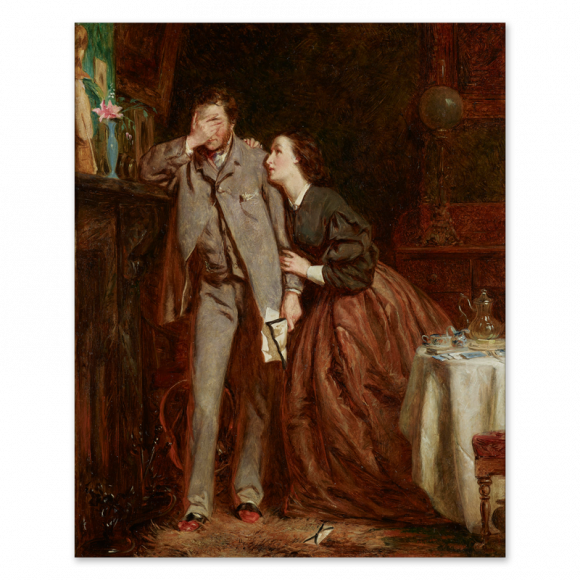 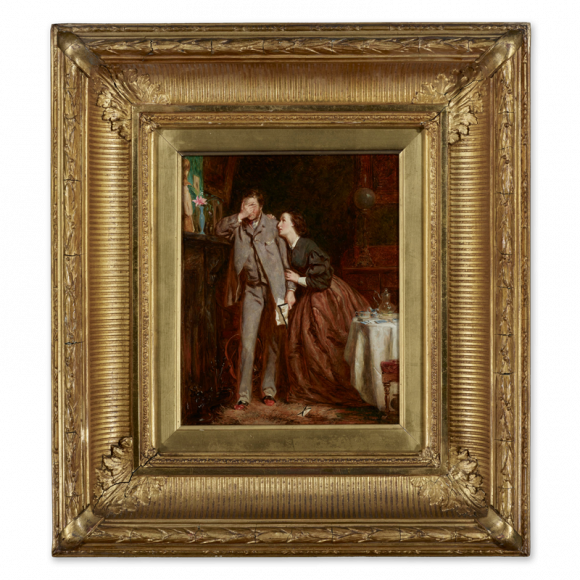 George Elgar Hicks was one of England’s best known painters of genre pictures, portraits and scenes of contemporary life in the Victorian period. He was initially destined for a career in medicine, but showing considerable ability in drawing and sketching from quite a young age he persuaded his family to let him study to be a painter. He entered the Royal Academy Schools in 1844 and by 1848 he began a long and illustrious career exhibiting at the Academy but also at the British Institution and at the Society (later Royal Society) of British Artists in Suffolk Street. He was elected member of the latter society in 1889. In some ways he was a typical Victorian artist, showing competently composed, if slightly sentimentalized figures going about their business with a hint of a moral message in the picture. Similarly, especially latterly, he showed a good number of highly professional portraits, which formed the backbone of his livelihood. However, in the late 1850s and through the 1860s he became considerably more ambitious in his reach and produced a series of very remarkable multi-figured scenes of contemporary life of the day, on which his reputation will surely always rest. The Post Office (1860), Billingsgate (1862) and Changing Homes (1862) are among the best known examples of these panoramas. And with these he can well stand comparison with that accepted master-painter of the Victorian Scene, William Powell Frith.

This present picture, Study for Woman’s Mission is a fascinating re-emergence of a hitherto unknown sketch for another of Hicks’ justly celebrated pictures. His Woman’s Mission, exhibited in the Royal Academy in 1863 was a triptych of three 30 x 25 inch canvases, held in one frame. The central section, for which this is a study, and the right hand section are now in the collection of Tate Britain. The left hand section is missing. There is a further set of sketches of all three sections in the Dunedin Art Gallery in New Zealand. Much has been written about this series of pictures as they are important demonstrations for the social historian of a very deliberate mid-nineteenth century view of the role of women. In the first picture the female figure is seen tending to the needs of a child, in the second the woman supports her husband in time of bad news and in the third she comforts an old man, presumably her father, in his last hours. There is of course a more modern view that this series of paintings underlines the restrictive and repressive way that a woman’s life was laid out. But that may be much too simplistic a reading. More correct perhaps would be to see this through the eyes of the painter and most of his contemporary audience not so much as something prescriptive, but more as an underlining of the vital role a woman played in the Victorian family.

The emergence of this very finely detailed sketch is exciting. Hicks’s completed set of sketches has been known about from his Notebooks (Private Collection). They were listed there as bought from Hicks by the dealer Flatow and it is this set which is presumed to be the three pictures currently held in Dunedin. Flatow had bought Hicks’s finished series of the three larger paintings and interestingly had also bought W. P. Frith’s famous Railway Station. However this present picture is something of a discovery as the existence of a further sketch was not known. In terms of the central section of the triptych both this present sketch and the Dunedin sketch differ in a number of respects from the larger finished painting (Tate Britain). In the major work the male figure’s suit is brown rather than grey and the woman’s dress is uniformly russet. The man’s tie is of a different colour and the woman has a pink bow at her neck. All these differ slightly from the sketches. In the larger painting too there are more objects on the table and more furniture in the room. The woman’s coiffure and facial expression differ slightly again. The existence of these two sketches allow us to follow Hicks’s thought processes as he works the picture out from premiere pensée to the finished item.

However, the differences between this sketch and the related portion of the Dunedin sketches are much less marked. They are in fact remarkably similar. The costumes are similar, the furnishings almost identical. The only variants appear to be a different arrangement of objects on the mantelpiece, a slightly different arrangement of the objects on the table, perhaps a cooler tone overall in the Dunedin painting and a very minor difference in the expression on the woman’s face and in her hair-style. It may be impossible to know exactly what the genesis of our sketch was. The Dunedin sketch is just marginally closer to the large finished version and that makes it probably that our sketch is Hicks’s first essay at the subject. Did he conceive of it initially as a stand-alone painting and only latterly as a triptych? In which case might he have started with this one, and then later composed all three of the small set in one go? Or could it be, given the marked similarity of the models to Hicks himself and his wife that commentators have noticed, that he wanted to keep one version of the central section for himself and hence produced two sketches.

But however it came into being, this wonderfully fluid little sketch, while lacking some of the detail of the finished picture, does make perfect sense on its own as well. We see a man grief-stricken at the bad news he has received, which is telegraphed to the viewer by the black edged letter and the fallen black-edged envelope. And we see his wife, care and compassion flowing through her expression and gesture, embodying the mid-victorian ideal of womanhood. This picture both in sketched and finished form is a delightful exercise in Hicks’s skills as a user of paint and composer of pictures. We are shown a typical middle-class parlour interior with all the furnishings and accoutrements an 1863 viewer would recognize. The manners of a couple of that period are similarly put before us – the laid breakfast table, the morning mail and of course the ominous black-edged letter. But this picture would also have been seen at the time of its exhibition - and we can still see it today – as an intriguing testament not only to what was expected of a Victorian wife but also what was justly celebrated about her as well.