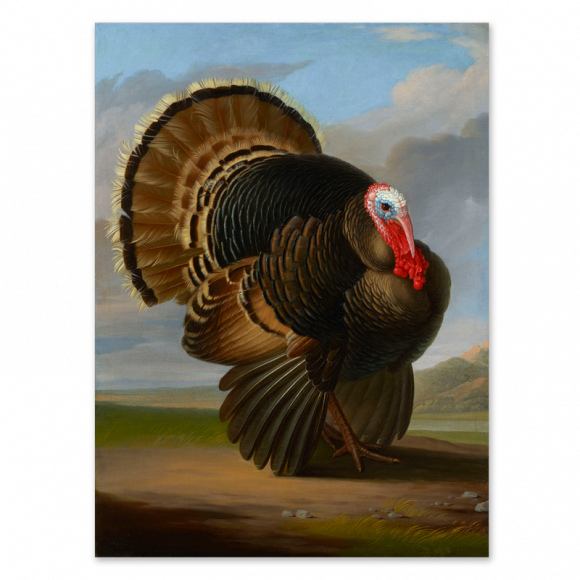 Born in Bohemia (now the Czech republic), Wenzel Peter moved at the age of 22 to Rome where he settled and built a sound reputation as an artist. His area of expertise was that of animal painting and he soon came to the attention of some of the most significant patrons of art in Rome. One of his earliest successes was his 1779 fresco of animal paintings on the walls of the Casino di Villa Borghese for Prince Marcantonio Borghese III. By the early 19th century he had become the foremost animal painter in Italy of his day, with his pictures entering many important private collections. After his death, his daughter Marianna Peter, remembering how her father’s work had been regarded favourably by the Popes he had known, sold a significant number of his pictures to Pope Gregory XVI in 1831. Among these was Peter’s monumental canvas Adam and Eve in Paradise, which shows some 240 species of animal from different parts of the globe. The anatomical accuracy with which Peter depicts these animals is a testament to his considerable scientific and zoological understanding of these creatures. This painting now hangs in the Vatican Museum.

Interestingly, Peter himself had declined to sell that large canvas in his lifetime, keeping it instead in his studio. Here he apparently used it as a form of advertising. Patrons thinking of commissioning an animal painting from Peter would be shown this work and could choose a subject to their liking from what the artist was effectively using as a large ‘sample painting’. This present picture of a turkey is clearly worked from the turkey that appears prominently in the centre foreground of Adam and Eve in Paradise. However, Peter has increased the scale of the bird considerably and placed it in its own landscape. The result is that the bird, with its full display of tail feathers and extraordinarily vibrant colours to the head, acquires an exotic kind of majesty. This powerful representation of a strange bird from the New World would have held a great fascination for the still relatively untravelled European in 1800. Depicted on this scale, with all of Peter’s brilliant colouring and precise drawing skills, it remains undeniably impressive today.