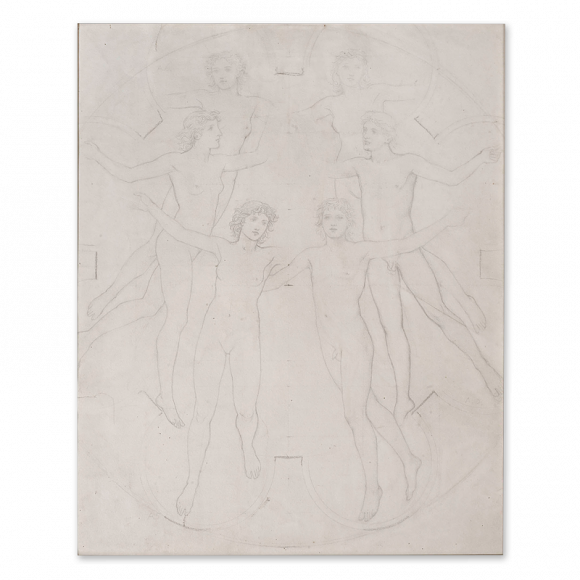 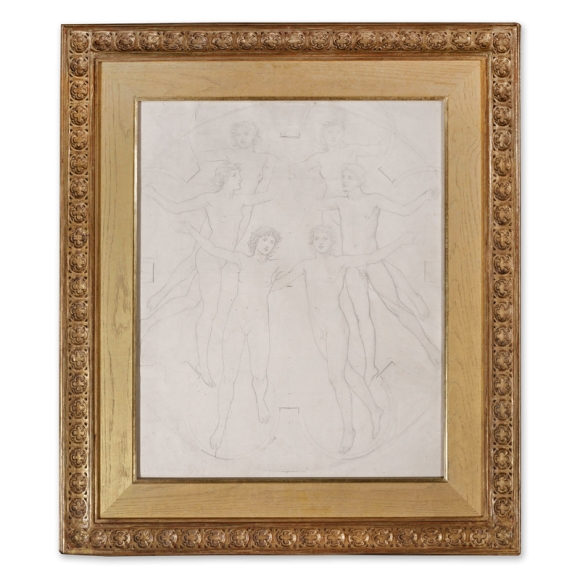 Henry Holiday studied art at Leigh’s Academy and the Royal Academy Schools. At an early age he met John Ruskin in the Lake District, who in turn introduced him to Edward Burne-Jones. This brought Holiday into contact with the Pre-Raphaelite circle and he began to visit Burne-Jones in his studio, where he became greatly influenced by the older man’s style and technique. In 1861, when Burne-Jones left the firm of Powell, for whom he had been designing stained-glass, Holiday took over his position working on over 300 compositions before leaving in 1890 to set up his own glassworks in Hampstead. A genuine polymath, Holiday worked not only as a glass designer but also as a sculptor, an enamellist and a painter. His most celebrated work in this last category must be his Dante and Beatrice - a famous work in its own day and now an iconic image in the Walker Art Gallery in Liverpool.

This present work is an undraped design for the tracery of the East window in the Church of the Epiphany, Washington, D.C., USA. In the glass window as it was finally executed, the circle of figures is a host of angels bearing halos. They are clothed and they support a banner, interlaced between them, that reads ‘Peace On Earth/Goodwill Towards Men.’

This design is typical of Holiday at his most inventive. It is in works like this one, with its delicate composition of interlocking, androgynous figures, that Holiday shows himself to be one of Burne-Jones’s very closest disciples.