Study for ‘Captain Macheath Upbraided by Lucy and Polly’ 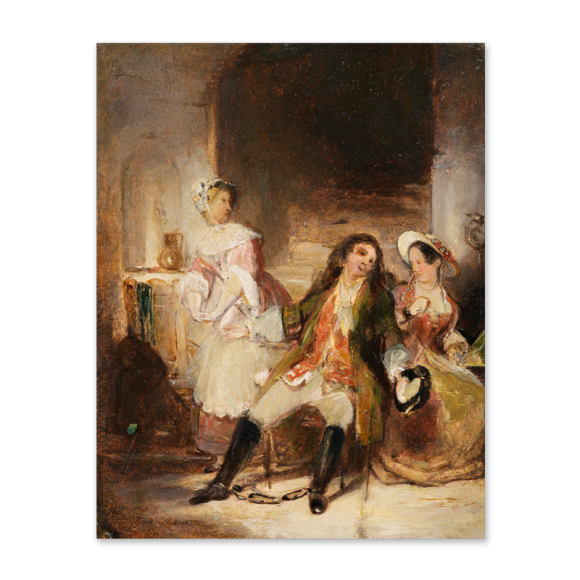 Gilbert Stuart Newton was a highly gifted artist whose promising career was cut short by his death at a young age. Born in Halifax, Nova Scotia, Newton trained originally with his uncle the celebrated American artist Gilbert Stuart, before travelling through Italy and France and finally on to London, where he entered the Royal Academy Schools. Newton was elected an A.R.A. in 1828, and a full Academician in 1832. Shortly thereafter, the artist suffered a mental breakdown which led ultimately to his death in 1835.

The present work is an oil study for a painting exhibited at the Royal Academy in 1826 entitled Captain Macheath Upbraided by Lucy and Polly, a scene from John Gay’s The Beggar’s Opera (1728). Comparison with the finished work, now at the Yale Center for British Art in New Haven, Connecticut, shows marked adjustments to the compositional structure of the painting, suggesting that Newton experimented freely with various ideas for the composition before settling on the final version.

This is entirely in keeping with Newton’s working methods, as recorded in contemporary accounts. In their important text A Century of Painters of the English School (1866), Richard and Samuel Redgrave noted that Newton was not prolific, and ascribed this to the fact that he only ever arrived at the completion of a picture “after many changes and much elaboration.” Similarly, the artist Charles Robert Leslie, a close friend of Newton’s, described how one could visit Newton’s studio on subsequent days only to discover that the best part of a picture on the easel could have been “expunged and repainted” in the 24-hour interim.

“...so great is [Newton’s] facility that he never hesitates to dash out a figure or a group; and...if one of his figures on the surface of his canvas could be scraped off, we should find half a dozen under it, or might detect six legs to one man, four painted and covered over before the artist had adopted the last pair.”

The present study clearly documents this practice and offers a tantalizing glimpse into the workings of an artist whose coin is rare indeed.