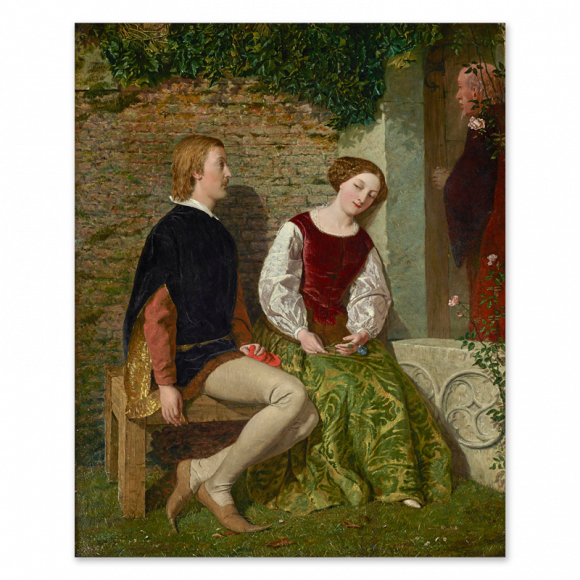 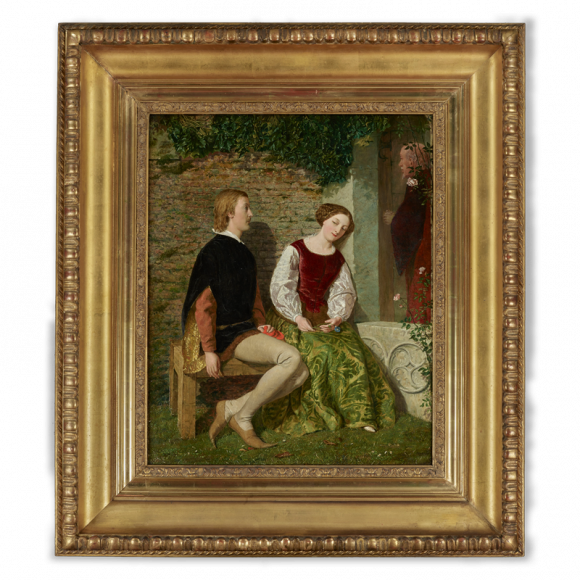 Ann : What is your will?
Slender : My will? Odd’s heartlings that’s a pretty jest indeed
I ne’er made my will yet, thank Heaven.
I am not such a sickly creature I give Heaven praise
Shakespeare : Merry Wives of Windsor

True adherents to the early Pre-Raphaelite manner of painting are few in number. The three hugely important figures of this movement - W.H. Hunt, J.E. Millais and D.G.Rossetti – once the enfants terribles of the British art world of the early 1850s, are now of course the orthodoxy of that key period. But the small group of disciples who faithfully produced works in their manner remain a rare but distinct coterie. To their number, on account of this present, recently discovered picture, can now be added the name of the tragically short-lived artist Adolphus Madot.

Biographical details are hard to come by, but research shows that Madot was the son of an identically named father who is listed in the 1841 Trades Directory as being a “Teacher of Languages”. With their distinctly French sounding surname it is probably safe to assume that Madot pere was an immigrant French teacher. Both father and son gave their addresses as 31 Upper Baker Street, so we can also deduce that this young artist was living and working from the family home. He enrolled as a student at the Royal Academy. Thereafter he seems to have made a living by working primarily as an illustrator. He contributed to Charles Mackay’s The Home Affections (1858) and also to the Poetical works of E.A.Poe (1858). But he was most consistently employed as a ‘draughtsman on wood’ providing reduced copies of the work of British artists for the Art Journal. During his brief life he sent five pictures to the Royal Academy and further pictures to the Royal Society of British Artists and the British Institute between the years 1852 and 1861.

The Art Journal, for whom he had been working, provided a moving and informative obituary for him in 1861. It is worth quoting in full :

We record with much regret the death of this promising young artist who, if health and a long life had been granted him, would undoubtedly have reached a good if not high position in his profession; but within the last year or two a delicate state of the lungs incapacitated him for arduous labour and, resulting in rapid consumption, prematurely cut short his career on the 11th of last month. Mr Madot had passed through the Schools of the Royal Academy. The few small pictures – figure subjects – painted and exhibited by him bore evidence of careful study and true feeling. Some of them we know are in good collections. The Chancellor of the Exchequer purchased that exhibited last year or the year before, we forget which. To us his loss will be severely felt for we were indebted to his pencil for very many of the copies on wood of the figure pictures which have illustrated the series of papers of “British Artists”. Considering the difficulties of reducing large compositions to our miniature scale, these drawings were, almost without exception, executed with great accuracy and truthfulness. Mr Madot’s quiet, unassuming and gentlemanly manner and his amiable disposition endeared him to all who had the pleasure of his acquaintance.

Like almost all involved in the early Pre-Raphaelite movement, Madot appears to have been fascinated by Shakespeare and he seems to have painted works almost exclusively inspired by his plays. The scene depicted here is Act III Scene 4 of Shakespeare’s Merry Wives of Windsor, in which the awkward Abraham Slender attempts to woo the heroine of the piece, Ann Page. Madot captures excellently the gaucheness of Slender, who is described elsewhere in the text as a man with a “little wee face and a little yellow beard”. Slender at this point in the play is merely following instructions to woo Ann Page, so we are shown his body unrelaxed, his fingers twitching and we can even sense that his words are not words to which he is in any way accustomed to using. For her part Ann Page is shown looking wryly at Slender realizing with her sardonic smile that there is no real feeling in his protestations, but rather that he is reciting by rote. But if Madot’s figure composition is faithful to the text, it is his extra-ordinary attention to detail that marks this picture out. Without question, Madot shows himself to be one of those rare and important artists who had become fully absorbed in the lessons of the early Pre-Raphaelites. The carefully observed theatrical costumes of the protagonists put one immediately in mind of Millais’ 1849 painting Isabella (Walker Art Gallery) or Walter Howard Deverell’s Twelfth Night of 1850 (Private Collection). The painstaking depiction of the ivy crawling over the wall is strongly reminiscent of P.H.Calderon’s well known painting Broken Vows (Tate Britain), painted interestingly in the same year – 1856. Every single leaf, every blade of grass is given the artist’s full attention. This is work of the hardest and highest order from this young man who, had he lived, would have undoubtedly given us much more in the same vein.

Intriguing to note too is that this picture was purchased from its exhibition at the 1857 Royal Academy show by no less a figure than William Ewart Gladstone, the “Chancellor of the Exchequer” referred to in the Art Journal obituary. Gladstone was in fact a strong supporter of the Pre-Raphaelite movement and acquired a number of their pictures. His own portrait was of course famously painted by Millais in later years and his daughter Mary figures as one of the models in Burne-Jones’s great painting The Golden Stairs. It is therefore a considerable endorsement of the young artist that Gladstone, a notable connoisseur by that time, would have singled out this particular work by a relatively unknown artist and purchased it straight from its appearance at the Academy. Voted out of office in the 1874 general election and with Disraeli looking to set to be Prime Minister for some time, Gladstone sold a number of pieces from his extensive collection with a view to funding his retirement. It was in this sale, held at Christie’s in 1875, that this picture was then re-sold.