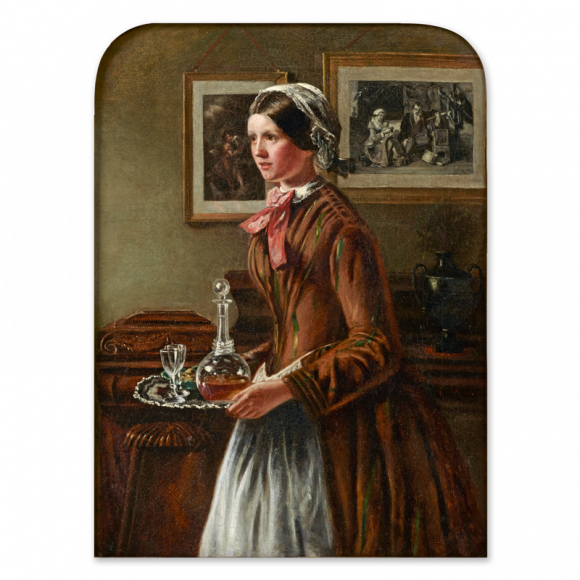 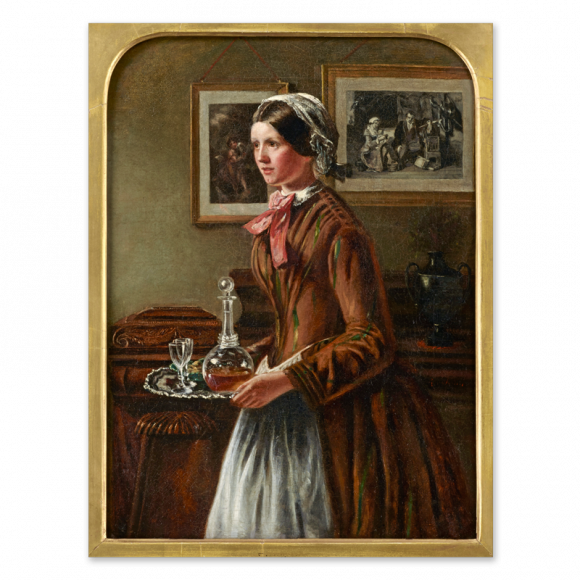 The emergence of this charming oil painting by Rebecca Solomon constitutes a pleasing and informative addition to the frustratingly small known oeuvre of this highly interesting artist.

Rebecca Solomon, the daughter of the successful London merchant Meyer Solomon and his wife Catherine, was one of three children of this large family to become professional painters. One of her elder brothers was the successful but short-lived painter of scenes of modern life Abraham Solomon (1823-1862) and it was with him that she first studied. She trained at the Spitalfields School of Design, but she shared studios with Abraham all of his life and the influence of her elder brother on her early work is clear to see. Her other artist brother was the wayward but gifted and near-visionary artist Simeon Solomon (1840-1905) and following Abraham’s death, she shared studios with Simeon over a number of years, possibly instructing him in turn at the outset of his career and later acting at times as his agent. But there is no question that she was her own woman professionally, exhibiting consistently throughout her life at the Royal Academy, the Society of British Artists, the British Institution and the Dudley Gallery in London and also at the major provincial centres. She died herself at the relatively early age of 54 in 1886.

There is at the moment only a small body of Rebecca Solomon’s work available to the art-historian to study. A mere handful are in public collections and, looking back over the last 30 or 40 years at auction records, perhaps a dozen works only have come under the hammer. However from studying the available imagery what does emerge is an artist who is a thoroughly competent figure painter, following the various trends of mid to late Victorian painting – sometimes traditional sometimes more avant-garde. In the pictures from the 1850s that have emerged she shows herself to be a genre painter, with a specific interest in the position of women in society. In the following decades we see her broadening her scope to include history or costume paintings which were of course highly popular at the time, and also embracing the emerging notions of aestheticism. Towards the end of her life she was known to have painted portraits.

This present picture, Sherry, Sir?, although undated, must belong firmly to the earlier category of her work and in all probability dates from around 1852 or 1853. Her 1854 Royal Academy exhibit The Governess (Private Collection) is a work which is similar both stylistically and thematically. Ellen Clayton in her book English Female Artists (1876) records that Solomon, still living and working at the time of Clayton’s publication, had been engaged in her earlier years by older more established artists such as “John Phillip, Frith, Millais and Faed”. The collaboration with Millais is well known and she worked as an assistant in his studio at various times. The high point of this relationship came about when she was commissioned to paint the reduction for engraving purposes of Millais’ famous Christ in the House of his Parents (1851). This copy of 1866, aided by Millais himself, was later bought in 1969 by the noted collector of Victorian art Sir David Scott and finally sold again at Sotheby’s in 2008 for the substantial sum of £600,000.

The relationship with Frith is less well documented, but Sherry, Sir? is enlightening in this respect. Frith painted a picture of the same title in 1851 (Mercer Art Gallery, Harrogate), which became a remarkably well-known image in its day. He painted more than one version of it and it was in due course engraved. It eventually even found use as an image for a long-running advertisement campaign for the sherry company Williams and Humbert. That Solomon would paint a picture of the same title might lead one to expect a direct copy. However, whereas Frith’s subject is a clear faced young servant-girl, painted against a blank background and engaging directly with the viewer, Solomon’s servant girl is painted in a more equivocal manner. She is similarly attractive and demure but, being painted from the side and set against the backdrop of a middle-class interior, the viewer is invited to reflect on her status in life and perhaps on the future path available to her. This is still a genre painting and by no means a full-blown piece of social realism, but Solomon does seem to be underlining the definite restrictions on this young girl’s position in society. The prints hanging behind her may add to the artist’s interpretation. Unidentified at the moment it seems that to the left we are being shown an allegorical subject after Gainsborough or Reynolds, depicting a young peasant boy or girl holding a dog in a landscape. To the right a more specific engraving of a genre painting of Solomon’s own day showing what looks to be an itinerant family of Italian or Spanish street vendors. Positioning her servant girl between these two prints Solomon may be asking us to compare the 18th century idealization of a life of rustic poverty with its urban actuality in the 19th century. The serving girl’s own situation is obviously not too distantly related.

What we learn also is that Rebecca Solomon was no slavish copyist. Frith’s picture must have been the starting point – and gives us of course the rough date of our work. But what is probable is that following the success of Frith’s picture, Solomon was commissioned by a client to paint ‘something in the same vein’. This she has done, putting her own particular slant on the subject and at the distance of the 21st century of course, hers seems now by far the more interesting of the two.

There is more to appear from Solomon’s hand and more to understand, but the addition of this charming - but telling – work to the body of her known oeuvre is gratifying. Rebecca Solomon was in some ways an outsider in her day on two counts. She was Jewish and she was a woman. Did both these factors enable her to take a slightly more distanced view of the role of women in mid-19th century Britain? Looking at the sociological subtleties of Sherry, Sir? we would conclude that it did.