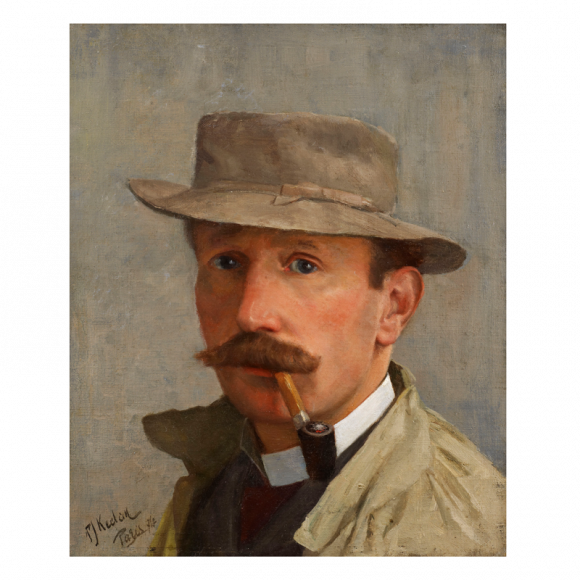 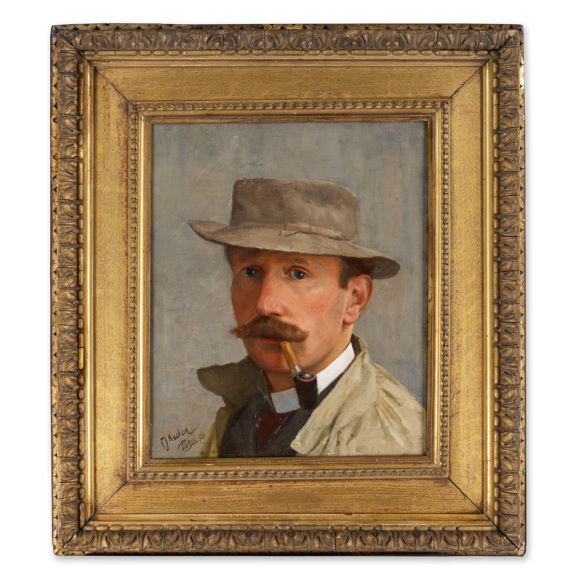 This intriguing portrait, so redolent of the more bohemian artists of the late Victorian and Edwardian periods is the work of the Irish painter, Peter Keelan, about whom information is hard to come by. He trained at the Dublin Schools of Art and further in Antwerp between 1878 and 1880. Beyond that we know that he was in France in the 1890s. Here he was not only in Paris, as the inscription on our picture shows, but he was also in Brittany – specifically in Pont Aven. Around 1890 we know he sent back to the R.H.A. in Dublin a small number of works, which were exhibited there, giving his address as Pont Aven. It is intriguing to think therefore that he must have been amongst some of the more avant-garde artists of the day. One thinks of Paul Gauguin of course, but also rather closer to home, the Irishmen Walter Osborne and Roderic O’Connor who were also out there at the time.

Piecing together the rest of Keelan’s career must of necessity at this stage be speculative. We are probably safe to assume that he was in Paris, like so many artists of his generation, to further his artistic education. So he may well have attended a studio like the Academie Julien. And there is no question that in style this picture has much of the Salon Naturalists about it. The broad brush approach to painting with the close-to-the-viewer stance, so notably picked up in France by the Newlyn painters in England or the Glasgow Boys in Scotland, is clearly in evidence here. But if Keelan in 1894 is looking to be following in those footsteps, we also have to allow that a stay of a few years in Pont Aven could have altered his style again. What is certain is that this painting shows him to have been a painter of clear ability, able to produce a portrait of considerable magnetism. When more of his work surfaces onto the market, we shall be able to make a fuller appraisal of this intriguing, but for now shadowy artist.

In terms of the sitter, intriguingly, Geroid Hayes, currently writing a PhD thesis on the Irish painter Walter Osborne (1859-1903), has suggested that this may well be a portrait of Osborne and comparison with the known images in paint, pencil and photograph of Osborne do indeed underline this as a distinct possibility. Frustratingly, the records of Irish artists in their student days at the Royal Hibernian Schools were destroyed in the Easter Rising of 1916, so facial comparisons of Irish artists are sadly hard to come by. However, what can be deduced is that this must be a portrait of a close friend of Keelan’s. There is an immediacy to the juxtaposition of painter and sitter which would be inappropriate in a commissioned portrait. It would also appear that the outer garment worn by the sitter is typical of an artist’s painting coat of that time. So if this is not a self-portrait by Keelan, this it is most likely to be a portrait of another artist and one with whom Keelan would have been on friendly terms. The fact that Walter Osborne is of the right age and profession, was treading the same path at the time and looks strikingly like our sitter does make him indeed a very likely candidate.