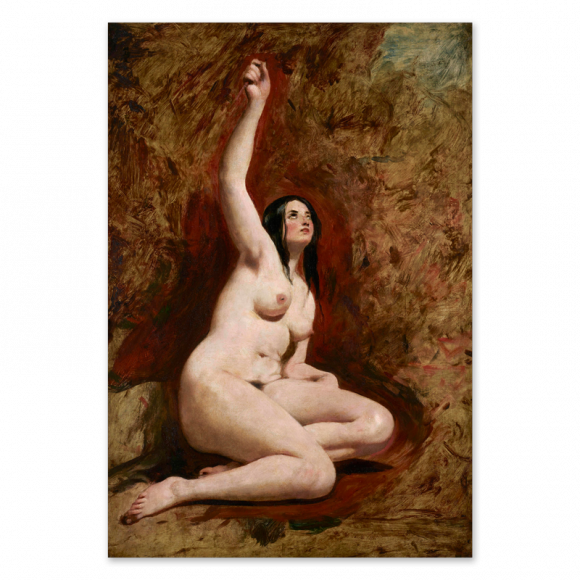 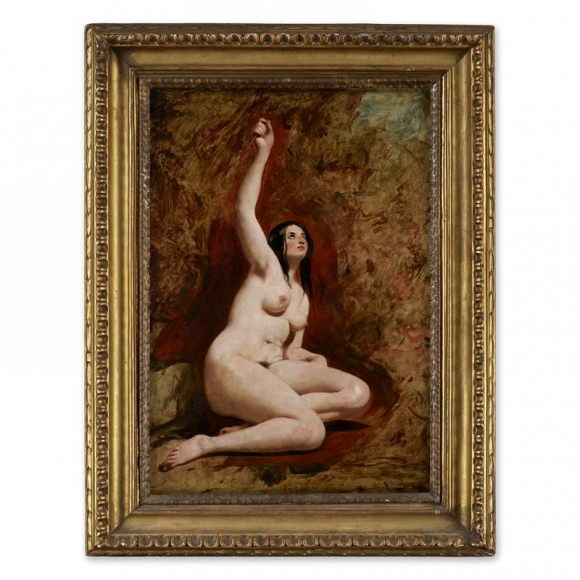 There purchased (date unknown) by a US private collector

Born in York, William Etty went to the Royal Academy Schools in London in 1807 and studied with Sir Thomas Lawrence the following year. He struggled at first to find an outlet for his work, but in 1811 a picture of his was accepted at the R.A. and from then on he was a constant exhibitor both there and at the British Institution. Recognition came in 1821 when he showed his Cleopatra’s arrival in Cilicia. This substantial work, showing the Queen arriving in her barge surrounded by numerous draped and semi-draped figures caught the public’s imagination and from that moment Etty was on the map. He became an A.R.A in 1824 and then a full Academician in 1828.

His major pictures from then on were almost exclusively concerned with classical or mythological subjects, leaning on old master precedents from painters like Titian, Veronese and particularly Rubens. But more than that his main pre-occupation was with perfecting his rendering of the nude figure – particularly the female nude. He continued to attend the Royal Academy life classes long after most professional painters would have left and as a result his oeuvre is replete with these beautifully rendered sketches of the nude. His larger pictures, more acceptable to his early 19th century public, can be found in numerous institutions, but his reputation today rests perhaps more securely on this body of nude figure studies. Most serious collectors of British art from the mid-nineteenth to the mid-twentieth centuries felt the need for a least one nude sketch by Etty. And if his star does not ride quite so high today as it once did, the skill of his portrayal of the human form remains compelling.

This present picture, one of his more substantial oil sketches of a female nude, is a typical and fine example of Etty at his best. Quickly rendered in the spirit of a sketch it shows his mastery of the female form. The subject is unidentified. It may be an idea for an Andromeda or for an Ariadne. Or it may even be a study for one of the female figures thronging the barge of Queen Cleopatra (see above), some of whom are holding on to ropes above their heads. But also it could simply be one of his life studies where the model holds an arm up, supported often on a pillar or in this case by a rope. He has then shaped the figure by his bold use of red, which sets off the flesh tones for the viewer. Etty wrote that “Finding God’s most glorious work to be woman, that all human beauty had been concentrated in her, I resolved to dedicate myself to painting (her)…more finely than had ever been done before”. An ambitious aim to be sure. But this present picture shows us how seriously and competently he pursued that aim.