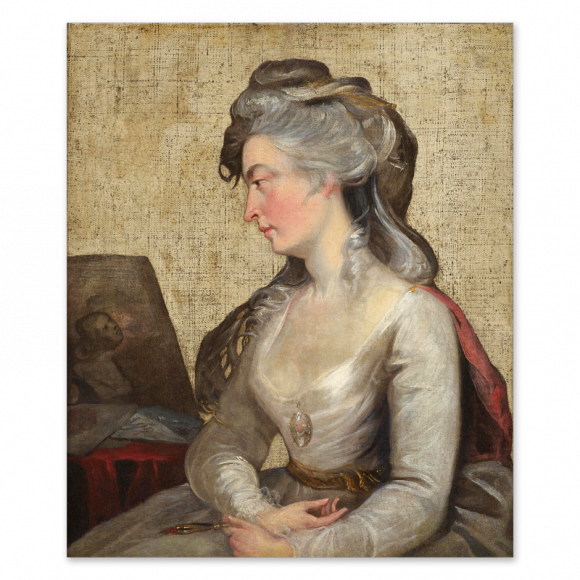 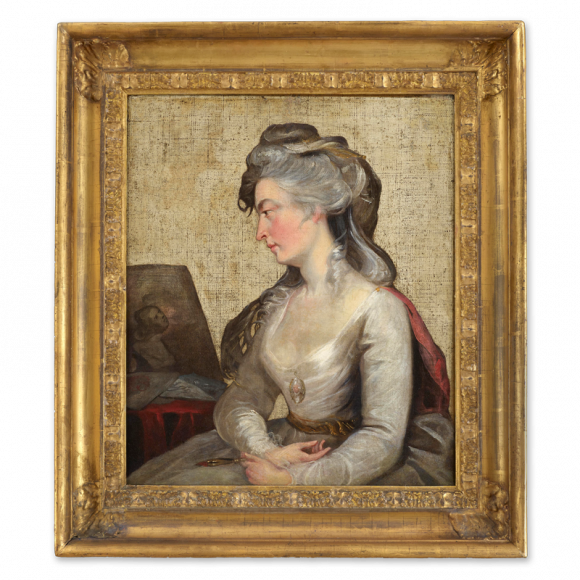 This previously unpublished picture by Daniel Gardner of the remarkable Anne Damer is an important addition to the iconography of this highly unusual artist, generally regarded as England’s foremost female sculptor of the 18th century. The present portrait, recently brought to light by Bagshawe Fine Art, is clearly of Anne Damer. Her facial features, particularly her long aquiline nose, are highly recognizeable. But so too of course is the sculpted head with which she is posed. This is a clay model for one of her sculptures “A Daughter of Niobe”, on which she worked around 1780 or 1781. These dates must also give us the parameter dates for our portrait.

Anne Damer has for a long time been a shadowy figure in the arts, being classified as a woman who took to sculpting as a hobby much as her fellow upper class women might have embroidered or sketched. But she is now emerging as a woman who actually rowed quite strongly against an unfavourable critical tide and produced a thoroughly professional body of work despite the odds against her.

Born Anne Seymour Conway, she was a protégée of Horace Walpole, who acted as her guardian during the many absences of her parents. Through Walpole she was exposed at an early age to many of the artistic currents circulating in England. From a young age she showed unusual interest in sculpture and took lessons in modelling from the Italian sculptor Giuseppe Ceracchi and in carving from the English sculptor John Bacon. She also studied anatomy with William Cruikshank. Thereafter she was largely self-taught.

She married the dissolute aristocrat the Hon John Damer in 1767, but the marriage was short-lived. After that she remained unmarried for the rest of her life. Her family connections enabled her to travel widely and she claimed acquaintance with highly influential figures of the day such as Sir Joshua Reynolds, Sir William Hamilton, Sir Horace Mann and Charles James Fox. More extra-ordinarily she became a close friend and correspondent of Josephine Bonaparte and even visited Napoleon Bonaparte to exchange gifts with him during his exile on the isle of Elba in 1815. Horace Walpole was convinced of her genius and promoted her tirelessly. At his death he bequeathed her a life interest in his famous Twickenham gothic villa Strawberry Hill, where she lived from 1797 to 1811.

Damer’s work today is the subject of considerable interest. Among her most notable sculptures are her self-portrait in the Uffizi, Florence, her portrait of her mother Lady Ailesbury, now in the Metropolitan Museum in New York, her heads of Joseph Banks, of Admiral Lord Nelson and of Elizabeth Farren, Countess of Derby. Her full length statue of George III is in the General Register House in Edinburgh.

Daniel Gardner’s reputation rests on the numerous small-scale portraits that he made of English society figures of the late 18th century. These works are lively and charming and, at their best, tours de force in his chosen and rather individual medium of gouache, watercolour and chalk. But he did work in oil throughout his life as well and these works can also portray considerable skill and dexterity, particularly in his handling of the fashionable high-piled, powdered hairstyles of his female sitters of the day.

This present painting is unfinished and therefore unsigned. Indeed Gardner would only rarely sign his work, but this painting is clearly by his hand. The small scale of the picture is consistent with Gardner’s proclivities, and two particular features of his work are very visible: the luxuriant loose handling of Damer’s hair, identical to many of his works in gouache, and also the slight awkwardness with which he handles the anatomy of her fingers. Further, Gardner and Damer knew each other well as Gardner was the chosen artist (probably chosen by Damer, in fact) for his remarkable picture of her as one of The Three Witches (now in the National Portrait Gallery, London).

A number of portraits of Anne Damer exist. The NPG have not only The Three Witches but also a good copy of an early portrait of her by Joshua Reynolds and a miniature by Richard Cosway. Yale have the Reynolds original. A number of drawings and engravings of her exist, most relating to works on paper by Cosway. But it is believed that this is the only work in oil which depicts her with the tools of her trade. With the increased interest in the role of women who practised in the arts in this period, this portrait - all the more lively for its spontaneous and unfinished appearance - is a delightful and unexpected appearance.