One Dinner a Week - Scene at the London Cottage Mission, Stepney 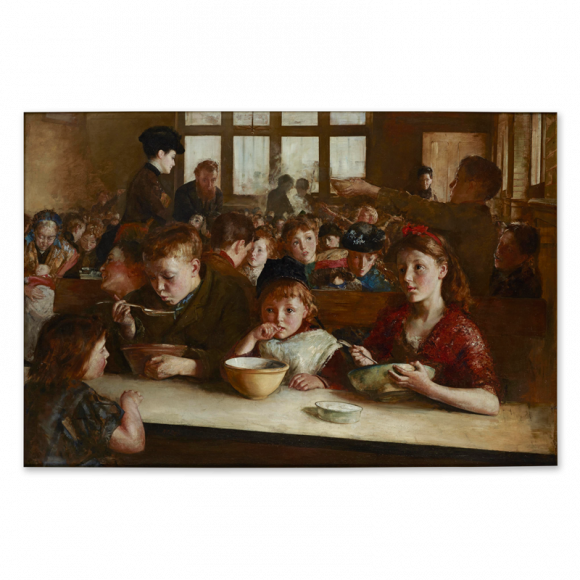 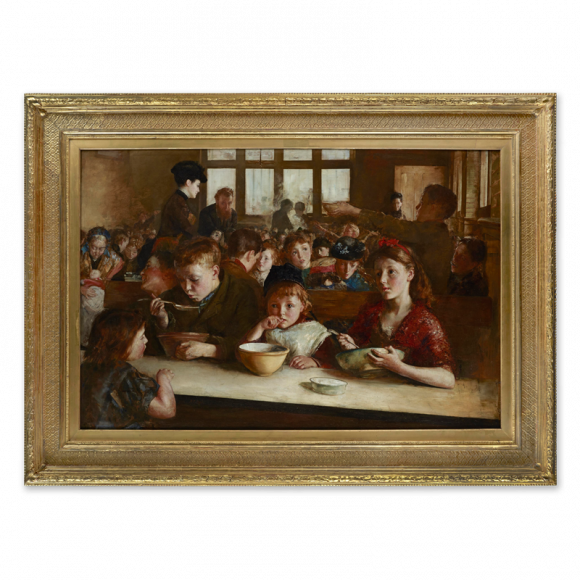 Robert Ponsonby Staples was one of Britain’s more colourful artists of the late 19th and early 20th centuries. His father, a baronet, was an army officer and as a result young Robert was educated mostly abroad, beginning his studies in Belgium at the Louvain Academy, with further spells in Dresden and Paris before settling in London. He initially found work as an illustrator and as such worked regularly for the Sketch, the Illustrated London News and the Graphic. But alongside this he developed as an oil painter and as a pastellist. He showed his first work at the Royal Academy in 1875 and he became a regular exhibitor at London galleries thereafter. He was a particularly keen supporter of the Grosvenor Gallery, founded by his relative Sir Coutts Lindsay, and he exhibited there when he could. Indeed such connections in London meant that he was in touch with fashionable society, moving in the Café Royal set of the day, which undoubtedly helped his career.

Staples’s early work has a definite Victorian feel to it, but like many of his contemporaries as the 19th century drew to a close he was caught up in the various strains of French Impressionism that influenced so many younger painters in Europe. His palette lightened, his brushstrokes quickened and he produced a host of charming sketches and pictures of middle-class life at the turn of the century. Apart from these smaller works, his reputation until now has rested on a handful of major works now in public collections. The best known is perhaps his 1887 work Australia v England at Lords, a large canvas now in the collection of Lords Cricket Ground, which shows a fictitious match featuring all the famous players from the two countries being watched by a crowd of notable celebrities of the day. His large shooting picture The Last Shot for the Queen’s Prize at Wimbledon, also painted in 1887, is another skilfully handled grouping of a large number of figures and it hangs in the Worthing Museum and Art Gallery. The House of Lords has his impressive Gladstone introducing the Home Rule Bill. The Ulster Museum in Belfast houses his Shipbuilding in Belfast, a triptych.

In later life, Staples took an increasing interest in his family’s house and estate at Lissan in Co Tyrone and on the death of his eldest brother in 1933 he inherited the baronetcy. By this time his painting appears to have become more of a pastime as he grappled with the administration of his estates. But if he is remembered today as an artist of considerable ability, he will also be remembered in Ireland as ‘The Barefoot Baronet’, due to his bizarre habit of going about in his later years without shoes. He became convinced that the wearing of shoes prevented man from absorbing the all-important energies of the earth beneath his feet and was even seen from time to time walking barefoot on the tram lines in Belfast for the supposed benefit of his health.

The re-emergence and correct identification of Staples’s early masterpiece One Dinner a Week is a major addition not only to the artist’s known oeuvre, but also to our visual understanding of poverty in the East End of London and Victorian society’s attempts to alleviate it. This picture shows the day to day workings of the London Cottage Mission, which was one of a number of charitable organizations running what became loosely known as ‘Soup Kitchens’. This particular organization was fortunately well-documented in that Charles Dickens (junior), the son of the famous writer, took an interest in it and recorded his visit to the Mission at 67, Salmon Lane (then in Stepney, now in Limehouse) in his publication All The Year Round. This article, titled One dinner a Week, came out in the Spring of 1884 and was reproduced in book form later that year in conjunction with a further essay called Travels in the East. The article tells us that the managing director of the Mission was one Walter Austin, an energetic raiser of funds for the cause. In the Dickens book his portrait appears as a frontispiece and is directly comparable to the gentleman serving the food in Staples’s work. It also tells us that two ladies, a Miss Evans and Lady Colin Campbell were also often present, helping to serve the food to the children. It is clear from a titled line drawing illustrating the Dickens article in the book, as well as from Staples’s correspondence, that the lady prominent in the Staples picture is indeed Lady Colin Campbell. The text is disarming. Dickens writes how he witnessed the arrival of a great throng of children, armed with any kind of vessel and piece of cutlery that they could manage to bring, into the premises at Salmon Lane. There they were served Irish Stew by Austin, Lady Colin Campbell and others – and apparently to their hearts’ content. No second helpings were refused and everyone went away completely sated. He commented on their clothes, their noise before the meal, their near silence during its consumption and allowed himself to wonder of this ragged crowd if that might indeed have been their only proper meal in the week. But he was also vigorous in his praise of the institution and at the end of the book was even content to publish a call for donations from the management.

That Lady Colin Campbell should figure so prominently in this picture is notable. We know from Staples’s correspondence that she would sit again for the artist for one of the figures watching on in his famous Australia v England picture. The two may have known each other quite well. But Lady Colin, known to our age by her famously glamorous portrait by Boldini, now in the National Portrait Gallery, was at this time going through the early phases of her notorious divorce from her husband Lord Colin Campbell. Society had divided markedly over this case and moving among the normal social circles of the upper classes had become very difficult for her. As a result, so her biographers tell us, she effectively threw herself into good works and it was probably in this light that she would have been happy to have appeared, lending her presence to a charitable institution, on the walls of the Grosvenor Gallery, where this picture was first shown. Walter Austin is also an interesting figure. Running the London Cottage Mission from the late 1870s until the early 1890s, he was obviously highly successful in raising funds and in feeding many mouths. The mission eventually ran a rural branch in Kent as well, where some of these East End children could even enjoy a kind of holiday in the country for a week or two at a time. One Dinner a Week is a powerful visual representation of a particular Victorian approach to alleviating hunger and poverty. This system was reliant on considerable goodwill from the moneyed classes, but if well-structured could indeed meet its aims and objectives. By the end of the century, all across the land, these private enterprises would slowly be replaced by state-organized institutions, which would regularize such institutions and ensure more uniformity both in funding and result.

As an artist Staples approaches this subject head-on. He positions us, the viewers, close-up in the ranks of the children seated on their benches. The front two rows of children are delineated with the skill of a consummate portrait painter. The rows behind he treats more and more loosely as they recede, until eventually they blend into the background and the steam of the Irish Stew being served. The effect is that of a lively rabble, just as described by Dickens. Amongst the faces we see all kinds of expressions; innocence, wistfulness, hunger, dedication to consumption, but also some jollity. Prominent among the children is a boy who stands up, his bowl held out, looking for another helping. This must be an allusion - made also in the Dickens text - to his less fortunate forbear Oliver Twist, who was so famously denied a second helping in Dickens Senior’s great tale of childhood deprivation.

The picture was shown at the Summer Exhibition of the Grosvenor Gallery in 1884. Staples then sent it that same year to the Autumn Exhibition at Manchester, held at the recently re-named Manchester City Art Gallery (formerly the Manchester Royal Institution), where it sold. The purchaser was a Mr Beresford Cohen, a member of the family then managing Lewis’s, the famous department store which had been founded in Liverpool but which had by that time opened in Manchester as well.

One Dinner a Week is a work of considerable importance for the study of the Victorian charitable institution. Much has been written about the plight of the poor in this period, but this is one of the very few large-scale pictures in which a contemporary artist deals with this subject in paint. While this is first and foremost a work of art, there is nothing much imaginary about Staples’s approach. Here we have a faithful recording of the London Cottage Mission, headed by Walter Austin and with the added inclusion of one of the most written-about society ladies of the day. This is an important record of British social history at the end of the 19th century and as such can be seen as a natural successor to the best social-realist work of Fildes, Herkomer or Holl from the previous decade.