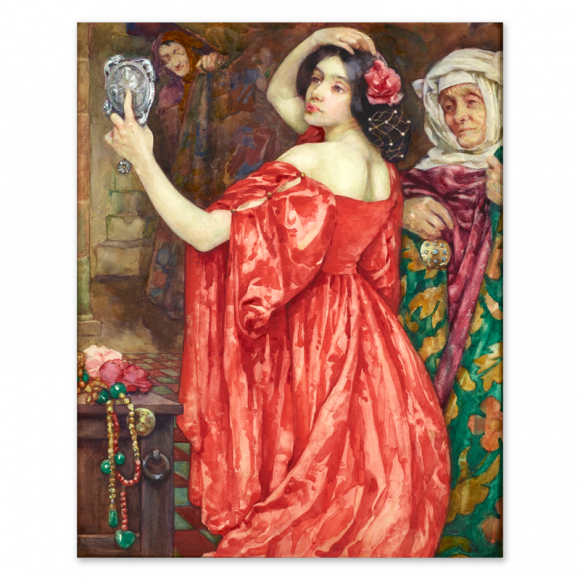 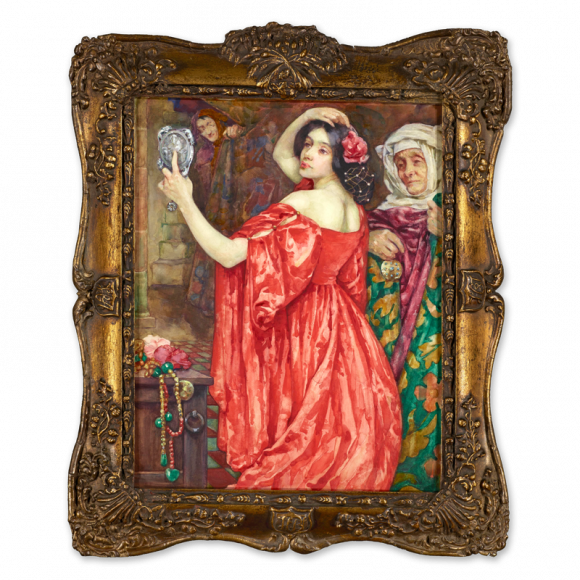 Of Scottish parentage, Isobel Gloag lived and worked all her life in London. She studied at St John’s Wood Art School and at the Slade, but with a constitution unsuited to the life of a full-time student, she then studied privately with Matthew White Ridley (1837-1888) and worked at the South Kensington Schools. After further study in Paris under Collin she returned to London where, working in both oil and watercolour, she produced pictures in the late Pre-Raphaelite or Symbolist manner. These she showed mostly at the Royal Academy or the New Society of Painters in Watercolour. She also made some designs for stained-glass and in her later years became known for her flower painting. Her persistent ill-health meant that her output was relatively small. It is known that she was at times unable to work for months at a time and this might explain why for example there are almost no works of hers in public collections. However, the quality of her best paintings show her to have been a considerable talent and it is hoped that this current lack of public representation will at some stage be rectified.

This present watercolour is a typical example of Gloag’s work in her earlier, Pre-Raphaelite manner. Exhibited at the Royal Academy in 1903, this work illustrates a line from Shakespeare’s King Lear (Act 3 Scene 2) spoken by The Fool. It is an extemporization on the theme of vanity, whereby playwright and artist remind us that female beauty is almost inevitably the product of considerable artifice and rehearsal. Gloag uses the lines to conjure up a medieval setting typical of an artist of her age, but her particular gift is to handle her main protagonists in the picture with deft draughtsmanship and a stunningly rich colour scheme. With her broad strokes of watercolour she juxtaposes remarkably strong colours in the foreground creating an almost abstract sense of sumptuous patterning, highly suited to her subject matter. In this bright and vivid bringing to life of a Shakespearean idiom she is best classified with those other late Pre-Raphaelite lovers of colour, John Byam Shaw (1872-1917) and his close follower Eleanor Fortescue Brickdale (1872-1945). As Burne-Jones and others began to move towards a near-monotone colour-scheme at the end of the century, Shaw and Brickdale reacted against this and revived the colourist instincts of the early Pre-Raphaelites of the 1850s. In this deft and charming work, Isobel Gloag can clearly be seen as a talented proponent of this tendency.