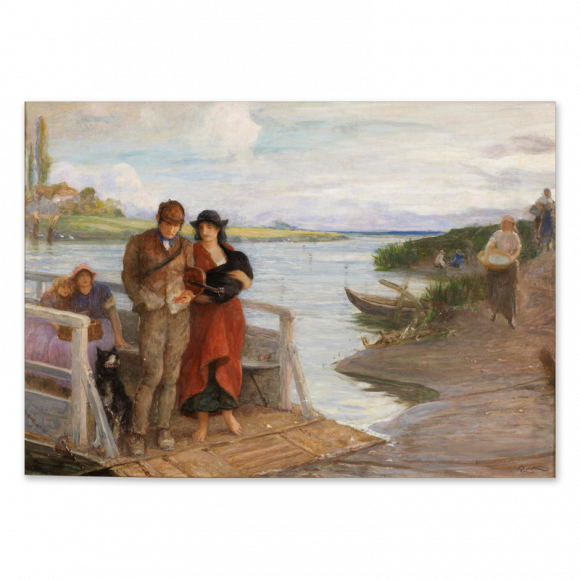 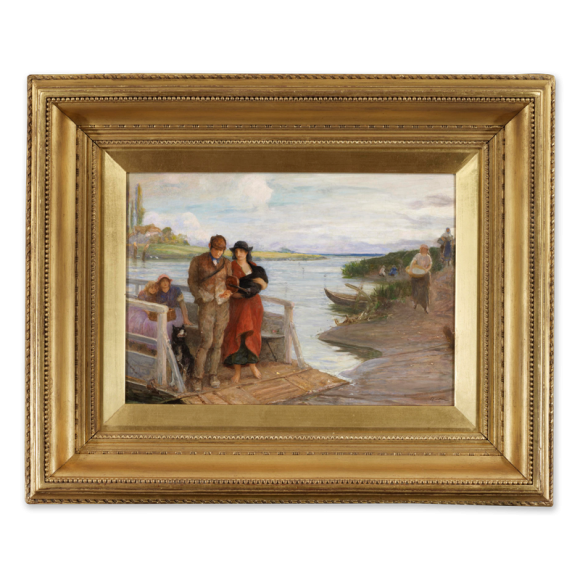 Make an enquiry
Item has been sold
Oil on Board
Signed with initials
Framed size:
10×14 inches (26×36 cm)

Robert Walker Macbeth was a Scottish-born painter of figure subjects and rustic genre scenes. He was born in Glasgow, the son of the Scottish portrait painter Norman Macbeth, and came to London to study painting. One of his younger brothers, Henry, was also an artist, changing his name to Henry Macbeth Raeburn to avoid any professional confusion. Robert Macbeth worked initially as an illustrator for The Graphic before exhibiting at the Royal Academy, the Royal Institute and the other major public London venues. The majority of his output is concerned with scenes from the everyday lives of working men and women – predominantly those making their living from the land. To that end he painted particularly in the Lincolnshire and Somerset countryside. His work can be compared to that of George Hemming Mason and Frederick Walker, both of whom influenced him considerably. James Caw in his Scottish Painters even compares Macbeth’s work to the novels of Thomas Hardy.

His Last Copper is typical of Macbeth’s work in that it shows him at work with his usual subject matter. The flat landscape and the ferry indicate that we are in the Lincolnshire fens. The impoverished, itinerant fiddle player, who opens his palm to show the last coin that remains to him, places Macbeth firmly amongst the British social realist painters of the day. His treatment of the subject treads a carefully balanced course. Sympathy for the lot of the rural classes is elicited, but with minimal sentimentality. The setting is totally believable, totally realistic. His contribution to this school though is not only as an oil painter, but also as an etcher. Interestingly, His Last Copper was the title of one of his etchings, shown in the Royal Academy in 1890 and sold for the benefit of the Artists’ Benevolent Fund. It is probably safe to assume that this present oil painting, pleasingly sketchy and small in scale, is his first attempt at this subject.