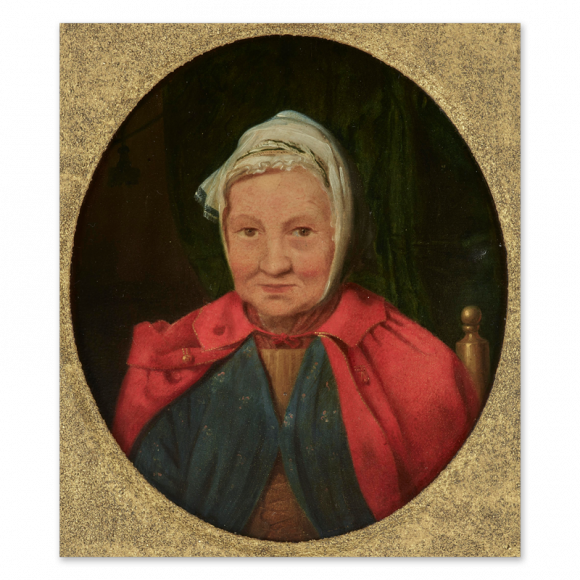 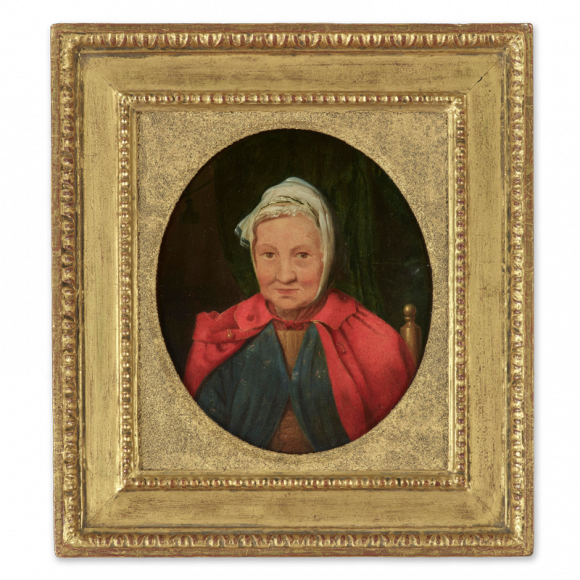 Make an enquiry
Oil on panel
Signed centre left "John Downman" and dated 1775
Inscribed, probably in the artist’s hand on paper laid down on the reverse of the panel: "The worthy person with whom Mr. West boarded when at Rome". Comparison with published examples of Downman’s handwriting suggests that the inscription is by the artist
Canvas size:
7.75 x 6.5 inches (19.5 x 16 cm)
Provenance:

Benjamin West, PRA (1738-1820) to whom given by the artist by descent through Maria West (Benjamin’s grand-daughter)

From 1768 Benjamin West was John Downman’s “most beloved teacher”. When on February 3rd 1774 Downman arrived in Rome in the company of Joseph Wright of Derby (1734-1797), the inscription on the reverse of the present picture suggests that he came equipped with a recommendation from West as to how to solve the problem of where to stay in the eternal city.

In a letter to his brother dated 10th Aug 1774, Wright says that “after a month in a house run by a very sensible old lady who comes from Irland [sic]”, by April 13th 1774 they were established in a house “reached by steps”, probably the Spanish steps leading to the church of Trinita dei Monti. The very sensible old Irish lady is presumably the subject of the present picture. Downman’s portrait technique was to make a life-study in chalks, from which an oil could be made at a later date. The chalk study for the present picture must have been made in February or March 1774, while the oil painting followed in the early months of 1775.

Benjamin West was in Rome from 10 July to 20 August 1760 and again from the late autumn of 1760 until the summer of 1761. During his initial stay he suffered from rheumatic fever, and had to escape the heat of the city by going to Leghorn. If his sensible Irish landlady nursed him during those five weeks, it seems quite possible that he would have recommended her to his pupil sixteen years later. Downman returned West’s compliment by painting her portrait, and presenting it to his master on his return to England in the late summer of 1775.

But the portrait is not only a souvenir, for Downman’s gift pays tribute to the landlady by portraying her in the style of a famous Renaissance masterpiece. With its oval format, its rich reds, yellows and greens, and above all its golden chair post, the portrait refers to West’s favourite Italian old master painting, Raphael’s Madonna della Sedia. Indeed, besides this portrait of his landlady, Downman also gave his master a copy of the Raphael, which he made in Florence in the course of his return journey. In addition to its sentimental significance, the portrait of West’s landlady advertises the fact that while he was in Rome the pupil was hard at work, practising his craft, and studying the Italian old masters.