Suffer the little Children to Come unto Me 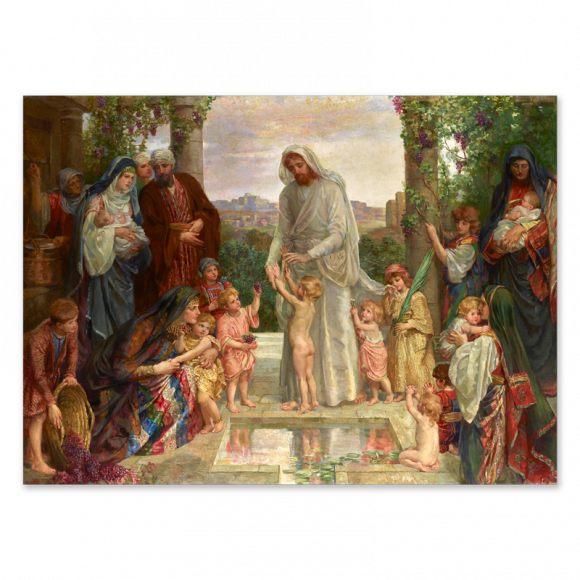 This substantial and impressive canvas is a major work by the American painter Anna Lea Merritt. Born in Philadelphia she essentially spent most of her working life in England, first in London and later in Hampshire. However, she was very conscious of her American heritage as well and made a point of exhibiting in the US and fulfilling portrait commissions there – especially in her native Philadelphia. Merritt is best known to us today through her works painted in a late Pre-Raphaelite style. The most famous of these must be her Love Locked Out (1890, Tate Britain), painted in a style influenced by late Burne-Jones or Poynter, showing the figure of a naked boy or Cupid figure, seen from the back, pushing against a tomb door. This referred with great feeling to the early death of her husband and art-teacher Henry Merritt, who had died in the very first year of their marriage. But along with a good body of professional portraiture Merritt produced other fine work in the Pre-raphaelite vein, showing considerable skill and beauty. Her Eve (1885, Private Collection) or her Watchers at the Straight Gate (1894, Private Collection) are now well-known images and worthy of inclusion in any serious collection of Pre-raphaelite work.

This present picture is a replica of a work she painted some 6 years earlier as a reredos for the Church of St Martin’s in Blackheath in Surrey. She was commissioned to paint a striking and technically innovative series of murals for this church. At the end of her work there she painted the first version of this subject – a large canvas designed specifically to be hung behind the altar. In her autobiography Love Locked Out, Merritt writes about this commission as follows :

‘In the summer of 1899 also, I finished the decoration of St Martin’s with an altar piece Let Little Children Come unto Me. It represented our Lord coming into a vineyard, among trellises covered with grape vines, and some workers of the vineyard, women and children – in all, eighteen figures were around Him. The size was six feet wide and fifty-three inches high. The price offered me was twenty-five guineas, which I found covered the expenses of the models and materials, but the painting was my “gift”. ….’

Merritt’s autobiography also contains a list of her pictures and the following entry must be for this present painting :

1903 ‘Let little children come unto Me’ (replica with some changes) (53x72) For Miss Beale LL.D. of Cheltenham College

We must allow for a little inexactitude in the dates (our picture is actually dated 1905). A number of Merritt’s (or the editor’s) datings in these lists are slightly incorrect. For example, the dates in the list for her mural works at Blackheath differ from the actual dates she painted on them. And there is certainly no record of her having painted a further version of this picture. The Gloucestershire location of the previous owners of our painting serves to underline the connection to Cheltenham nicely and of course the size of our painting is identical to that listed.

The commissioner of this second version was the redoubtable figure of Miss Dorothy Beale LL.D.(1831-1906), a well-known suffragette and educationalist, remembered today as the highly important early principal of Cheltenham Ladies College, where she served for almost 50 years. Later in her career she founded a teacher training college, St Hilda’s College, in Cheltenham and later still St Hilda’s Hall in Oxford, a college for women. This last would go on to develop into St Hilda’s College, now of course a full constituent college of Oxford University. Beale knew Merritt, thought highly of her work and indeed had her own portrait painted by her, which still hangs in Cheltenham Ladies College today.

Comparing our painting to the St Martin’s painting, this later version appears from illustrations to have been rather more carefully executed with a greater attention to detail. There is a slightly fanciful tale in the folk memory of the community in Blackheath that the St Martin’s version arrived at the church – almost too late for the dedication ceremony – on the back of a horse and cart with the paint still wet..! This is probably apocryphal, but there may be a grain of truth there somewhere, which might explain the sketchier and less detailed appearance of their reredos.

The title of this picture comes from the Gospel of St Matthew, Chapter 19, verse 14. This chapter tells of Jesus travelling from Galilee to the coasts of Judea. He was followed by ‘great multitudes’ to whom he spoke and among whom he performed acts of healing. At the same time he was quizzed by the Pharisees, who were keen to know his attitude to various religious customs, which Jesus appeared to be ignoring. But in the case of the children, it was in fact his own disciples to whom he was addressing himself in this particular passage of the Bible dealt with by Anna Lea Merritt. The expanded text reads thus:

13 Then were there brought unto him little children, that he should put his hands on them, and pray: and the disciples rebuked them.

14 But Jesus said, Suffer little children, and forbid them not, to come unto me: for of such is the kingdom of heaven.

15 And he laid his hands on them, and departed thence.

Merritt’s picture, shows Jesus in the act of blessing the children. There is first a recognizable connection in Merritt’s depiction of these children to her beautiful figure of the young boy in Love Locked Out, painted only a few years earlier. More broadly her depiction of the adult figures brings to mind – especially in terms of costume – Holman Hunt’s famous The Finding of the Saviour in the Temple (1860, Birmingham Museum and Art Gallery). But beyond that this picture is suffused with Christian symbols. Most prominent are the grapes, which brings to mind the wine which symbolizes the blood of Christ in a communion service. The ears of wheat, held up to Jesus by one child in the picture, again suggests the bread, which is the symbol in the communion service of the body of Christ. The little daisy held up by another child has a long tradition of being a symbol of innocence and simplicity. Further there is the prominent inclusion of the palm frond – suggestive of Palm Sunday, when Jesus would enter into Jerusalem in triumph.

For followers of Anna Lea Merritt and the late Pre-Raphaelite movement, the emergence of this substantial work further underlines her claims to be numbered among those women artists who were major contributors to art history of the turn of the 19th century. For Dorothy Beale of course, who had devoted her life-time to education, this image of Christ among the children would naturally have been highly meaningful.