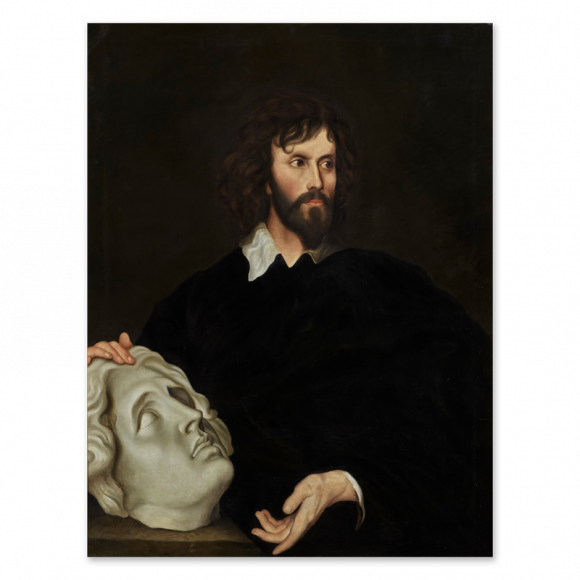 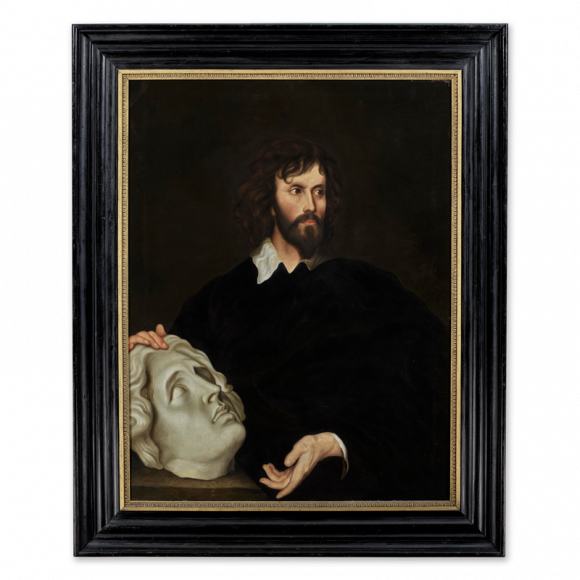 This imposing picture is a faithful early-nineteenth-century copy of the only known contemporary oil painting of the great French sculptor Hubert Le Sueur (c.1580-1658). The original picture, for many years thought to be by Van Dyck and indeed bearing still a false Van Dyck monogram, is now thought possibly to be the work of Adrian Hanneman (c.1603-1671), a follower of Van Dyck. This picture is now in the German Royal Collections in Berlin, where it is reliably recorded in inventories as having been there at least by the 1790s, although it well may have been there earlier. It was recorded as being in the Charlottenburg Palace by the 1930s, then in 1992 it was transferred to the Jagdschloss Grunewald. Since 1998 it has been at the Picture Gallery of Sanssouci.

Meyer Barschall was a painter working in Berlin in the 19th century. He studied at the Konigliche Akademie in Berlin in 1826 and was known as a painter of portraits, genre pictures and some religious paintings. But he also seems to have made something of a business of copying works on public display, among which the dictionaries note his copy of J.L. David’s Bonaparte as Consul (1826). Barschall clearly made his version of the painting of Le Sueur in Berlin, where it is known that the Royal Collections were made available to artists and students from the 1790s onwards. Interestingly Barschall not only thought highly enough of his own version to sign and date it himself, but it was also selected to be shown at the Berlin Academy in 1824.

The great seventeenth-century sculptor Hubert le Sueur was born in Paris and was successful enough there to be appointed Sculpteur Ordinaire du Roi by Louis XIII in 1614. He came to London in 1625 in the retinue of Henrietta Maria, the daughter of the late French King Henri IV and the future bride of Charles I of England. Le Sueur soon became Charles I’s favourite sculptor, producing over 50 sculptures for the king. But it was his skills as a bronze founder that suggested to Charles I that the sculptor should be sent to Italy to take ‘moulds and patterns’ of a number of sculptures from classical antiquity and bring them back to England. On his return, he produced a series of bronze casts after the Antique of classical writers and philosophers including Homer, Socrates and Archimedes. These sculptures were displayed in the gardens at St James's Palace during Charles's reign. Perhaps Le Sueur’s most famous statue in England is that of Charles I on horseback in bronze, now in Trafalgar Square. It was originally positioned at Charing Cross by Northumberland House and hidden away during the Civil War. Made in 1633, it is in fact London’s oldest bronze statue. From this Le Sueur cast a number of further bronze busts of the King, copies which were still being made in the eighteenth and nineteenth centuries.

This present picture of Le Sueur shows him – a rather dashing figure - half-length with his hand resting on a classical head. The head in question is the one discovered in Paros known as the Dying Alexander. This work of Greek antiquity was copied by the Romans and by the Italians from the fifteenth century onwards, and indeed must have been one of the figures from antiquity that Le Sueur himself copied and cast in turn on the instruction of the King when he was sent to Italy. It is notable that the Barschall/Hanneman picture chooses to depict Le Sueur with this classical copy rather than a work of his own. The viewer has to conclude that for Le Sueur – and for the commissioner of the portrait – the sculptor’s role as a conduit of classical statuary into England was one of supreme importance.

The identity of the artist who painted the original work in Berlin is still a matter of art-historical dispute, but Barschall has given us a version that is extremely close to it. It is interesting to think that as Barschall sat there in Berlin in 1824 making his copy, some 200 years after the original, he would have thought he was copying a Van Dyck. With the benefit of distance of course we can see Barschall’s own work as having some of the hallmarks of an artist working in the 1820s. There is a severity of line which reflects the influence of the Neoclassicism of his time. But it is of course something of a nicety that we ourselves are in turn now some 200 years distant from Barschall’s own interpretation, which - apart from the Berlin picture - is believed to be the only oil painting depiction of Le Sueur in existence.

We are grateful to Dr Alexandra Bauer, curator of Historic Houses and Collections in Berlin, for her help with this entry.