The Cobbler or The Weekly Register 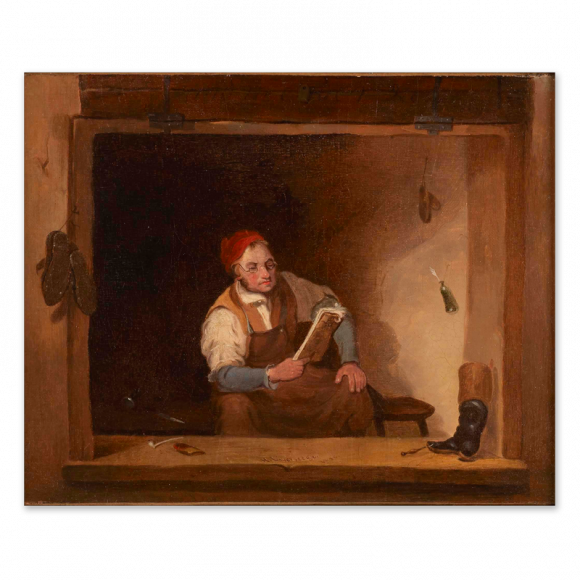 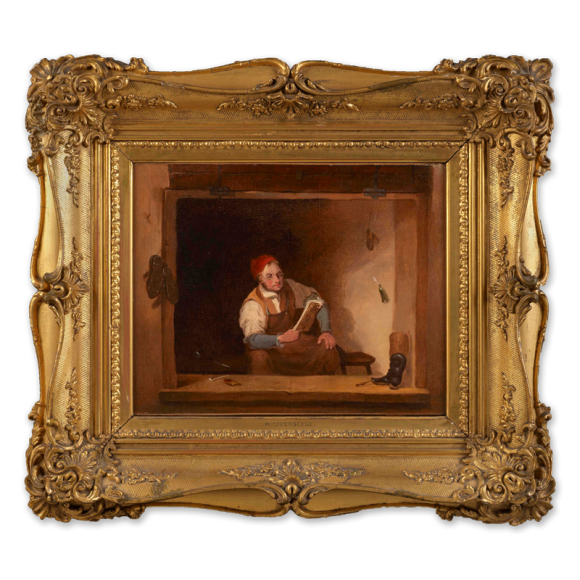 Henry Liverseege’s career was cut short at the age of 29 and it is clear that had he lived he would be much better known today. Born in Manchester in 1803, he was a sickly child suffering from asthma, under-developed lungs and a spinal deformity. Somewhat abandoned by his father he went to live with his uncle, a successful cotton manufacturer, who allowed him to study the fine arts. He exhibited first at the Royal Manchester Institution, but by 1828 was exhibiting both at the Society of British Artists in London and at the Royal Academy, where he is said to have been greatly encouraged by Sir Thomas Lawrence. A few portraits are recorded, but genre scenes, both contemporary and historical, seem to have been his subjects of choice. His work found its way into a number of notable collections, including that of The Dukes of Devonshire at Chatsworth. In his obituaries he was described as “The English Wilkie”, comparing him to the great Scottish genre painter Sir David Wilkie.

In this present painting Liverseege puts forward as he so often did a mildly humorous but perspicacious genre scene. He shows us a cobbler surrounded by the tools of his trade, his shutter open for business. He is seen straining his eyes to get to grips with the famous weekly publication of the time The Political Register. The Weekly Register as it was commonly known was a political publication published by the redoubtable William Cobbett (1763-1835), journalist and pamphleteer, best remembered today for his Rural Rides. It appeared almost every week from 1802 until Cobbett’s death in 1835. Liverseege’s picture must have hit a popular note at the time as we are here dealing with a slightly smaller version of the one he exhibited in the British Institution in 1830. The only reason for a secondary version would be the popularity and sale of the first, or possibly the demand for a slightly smaller one from which the engraver (Giller) could work.